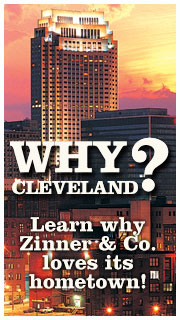 Zinner & Co. LLP evolved as a result of many individuals and different companies who have come together to form the current organization.

Harry Zinner started his practice in 1938 as a sole practitioner. Harry's practice was largely a bookkeeping practice, doing work for many small businesses in the Greater Cleveland area. In 1966, his son, Donald Zinner, left Price Waterhouse and joined his father's firm. In 1967, Don became a Partner and the Firm was renamed Zinner & Zinner.

After David left Harry Zinner & Co., the Firm merged with another sole practitioner, Gary Hamos, who became a partner. Gary Hamos passed away in March, 1990.

Rabe, Adler & Co. started as a partnership between Leonard Rabe and Gabor Adler in 1984. Ten years later, Gabor Adler became Managing Partner of this firm and then merged with Zinner & Co. LLP on January 1, 1996.

Donald Zinner stepped down from the Managing Partner’s role at the end of December 2002 and formally retired from the firm in April 2007. Robin Baum assumed the role of Managing Partner on January 1, 2003 and continues in this role today.

In December of 2018, Gabor Adler and Howard Kass retired from Zinner & Co.