Employee or Independent Contractor?  The California Labor Commission ruled this week that an Uber driver, Barbara Ann Berwick, is an employee, and not an independent contractor, in response to an appeal by Uber, upholding the labor commissioner’s award of roughly $4,000 in expenses to the San Francisco-based driver. 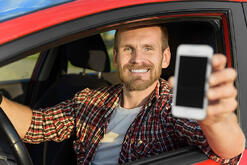 The importance of determining if a worker is an employee or an independent contractor is that, while employers must pay and withhold various taxes for employees, independent contractors’ bear the burden of paying those taxes, themselves.  The affected taxes include both federal and state employment taxes.  In addition to the tax burden, Federal Senate Bill 459 levies a penalty that ranges from $5,000 to $15,000 for each willful misclassification of employees as contractors.

Uber argued that its drivers were independent contractors on the basis that its smartphone app merely links the contractors (drivers) with customers.  The Commission said that, because of the behavioral control Uber has over its workers by controlling the tools the drivers use, monitoring their approval ratings, and terminating access to the Uber system if a driver’s rating falls below set benchmarks, Uber’s drivers are employees.

The direct impact of the California Labor Commission’s upholding of Berwick’s award is negligible.  The $4,000 awarded amount seems insignificant to Uber’s projected $10 billion in revenues for 2015.

However, the most potentially damaging aspect is the precedent set by the ruling.  Both the IRS and California will likely use this determination to evaluate the rest of Uber’s 160,000 drivers.  If they, too, are found to be subject to similar control, the classification as employees will likely apply to them, as well.  Thus, if the remainder of Uber’s drivers meets the same criteria as Berwick, the penalty for willful misclassification of employees as contractors could range from $800 million to $2.4 billion in penalties.

The largest impact of this ruling may be the precedent set that the IRS and other states may use.  An added source of revenue for each state may be to re-evaluate the status of its workers to see if independent contractors should be classified as employees.

Understanding the differences in classifications as an employee or independent contractor can be confusing. The Zinner team of financial and business advisors can help owners and employees properly classify to ensure their tax position is accurate.  I'm ready to help; contact me at 216-831-0733 or  Cblankschaen@zinnerco.com for a no cost, no obligation consultation.